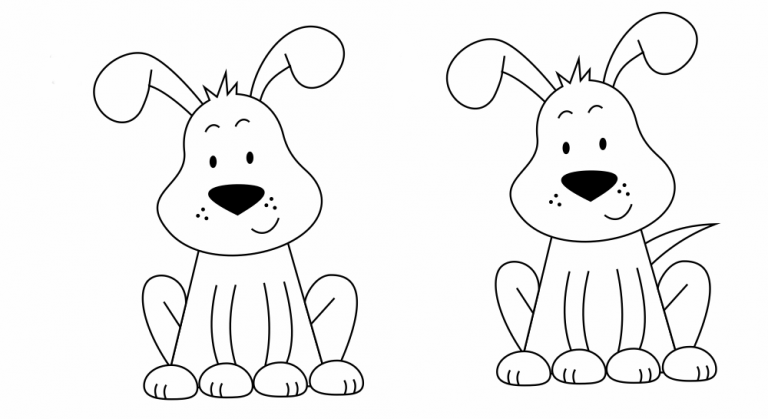 Ever wanted to know how to draw a dog? Then you are exactly right here. I show you step by step how a dog is drawn. Actually, the instructions are self-explanatory, so that it is even easier to understand all the steps, I have additionally written you more detailed instructions in text form below the pictures. So it should work with your dog!

For me, the difference is not in the point of whether the dog is small or tall, has short or long legs, is light or dark, but in the structuring of the coat. The easiest way to start is with shorter coat dogs like Bert.

Make it easier to get started by keeping portrait art and working at least A4 size. The smaller your drawing is, the more complicated it becomes. On larger sizes you can let off steam, recognize more while drawing, and can become more detailed. That makes your drawing look very realistic in the end.

Front and back are important, as well as shadows over flat surfaces. The most important point for dog’s ears is to play with the overlap and also what kind of races it is. To do this google one’s favorite race or look through the directory to get more involved with it.

Of course, every dog has a different physique, but for the workshop was based on larger dogs to explain the principle of the legs, dog legs are not dashes that go down. The front legs begin at the neck area, while the hind legs have a special bow, also on the shape of the paws itself is recognizable whether it is rear or front legs. I repeat myself, but look at pictures or best real dogs, learn to understand what you draw before you draw it. It does not matter in which style or with what precision is drawn, but understanding of the things that are drawn, expand the scope of your works.

1. First, we start with the head. It’s easy, just think of pear and draw it. At the top of your head, you draw a few hairs directly, that is quite fixed, you need to paint a few points up to the head.

Note: All the light lines in the manual are pencil lines that are later erased, black lines remain.

2. Now our dog needs his face. The eyes are in the middle of the head, at the height where our head shape makes a swing outwards. Leave a little space and then draw the nose in the place where the widest part of the head is located. Complete eyebrows, mouth and mustache spots.

3. Now come the ears. A little bit next to the hair of the dog you now draw the ear. It looks more heavy than it is. You just draw a sweeping bow upwards. Then draw an arc back in and then connect it with a line to the dog’s head.

In order to make the ear look a little more natural, you can draw a very short line where the bow begins and ends at the head.

4. Now the dog gets his body. As we partially overpaint these lines afterwards, we prefer to draw the lines with a pencil and then only lightly press while drawing.

Draw two lines down from the head that widen slightly outwards.

5. Now the dog gets his paws.
Actually, you draw only four “circle” circles side by side.

First, draw two “plate” circles on the outside of the body. The center of each circle should be approximately at the point where the body stops. Then draw two more “circle” circles in the gap. So you have four paws, which are about the same and are in line.

6. Now it’s time to erase lines in the feet. Now the dog gets his legs.
We start with the left leg. At about the middle of the line of the body, we put on the first leg. First you draw a slight arc outward, which then pulls down to the outermost paw.

In this bow, you draw a slanted line from the body high in the arch of the leg, but only a small piece.

7. Now the dog needs two front feet. This is really easy. You just paint two lines from the inner paws upwards. Orient yourself on the outer legs of the dog, then you know how high you have to pull the lines approximately.

To make the paws even clearer, simply draw two small curved lines each. Place them on the bottom line of the paws.

8. Now the dog needs a tail. This is simply drawn. a bow to the outside and back and you’re done with your dog!

You did a great job!