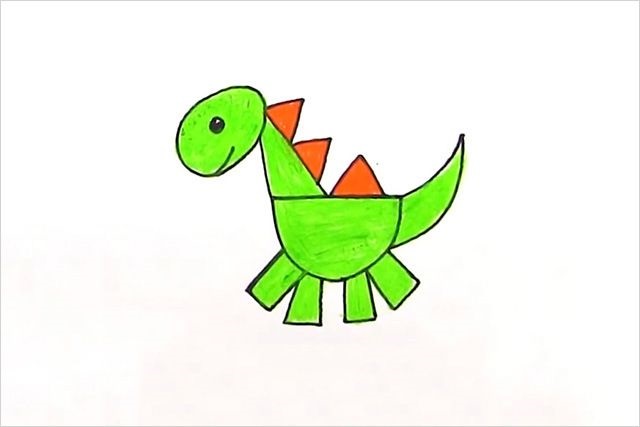 Dinosaur is a generic term for a creature that is the most famous ancient creature within the scope of human knowledge. Nowadays, dinosaurs are extinct, but this does not stop humans from studying them, and a large number of dinosaur images appear in literature and film, which have become part of modern popular culture, so kids can learn about them from many sources. In today’s animal sketch, we use the easiest way to draw a dinosaur sketch.

How to draw a dinosaur?

Steps of drawing a dinosaur:

2. Draw two straight lines to connect the head to the body, which serves as the neck.

3. From the right end point of the diameter of the semicircle in step 1, draw two curves upward to form a half horn-like shape, which serves as the tail of the dinosaur.

4. Below the body, draw four rectangles as the four legs of the dinosaur.

5. Inside the head, draw a short line for the mouth and a circle above the mouth for the eyes.

6. Then draw a row of triangles as the dinosaur’s spines on the neck and the diameter of the semicircle in step 1.

7. Finally, color the dinosaur with crayons. This makes it simple to draw a dinosaur.